It's beginning to look a lot like Christmas. So many of us get busy with the holidays that we forget to take time to spend with our little ones. I love finding opportunities to cuddle and some Christmas TV specials provide the perfect opportunity during the week. "Christmas in Rockefeller Center" airs tonight at 7 pm (central) on NBC. With singing from plenty of stars, this is one way to bring the season to your home and you can even get some decorating done. Happy holidays!

Remember: my new book "100+ Activities for Houston Kids" makes a great gift. Join us at the Barnes & Noble in West University on Thursday, 11/30 from 6-9 pm for the offical book launch party. Hope to see you there.

Until the next nap time...
Posted by Kids Activity Queen at 3:05 PM No comments:

Here's an easy way to kick off the holidays as a family. Tune in tonight at 7 pm to "A Charlie Brown Christmas" on ABC. This fun classic sneaks in the real meaning of Christmas, while incorporating all the festivities. Plus, it's FREE so you don't have to pull from the holiday budget. Enjoy!

For more fun activities for kids in Houston, check out my book 100+ Activities for Houston Kids, now available in local book stores and through my Web site at www.TellYourTale.com/Kids. And sign up for my FREE, monthly newsletter by visiting http://www.tellyourtale.com/resources.html.

Until the next nap time...
Posted by Kids Activity Queen at 5:23 PM No comments:

If you're looking for something to do with your kids during the week or looking ahead to the weeks when the kids are out of school for the holidays, consider Art Mix at 3701 W. Alabama. This place has wonderful, artful activities for children starting at 18 months of age. My daughter loved painting at the easel, reading books about art and gluing art pieces onto an animal cut out to make her own collage. I really like this because it's a creative way to interact with my child. Next time, we'll tackle play dough.

Art Mix offers regular classes for kids 2-12 years but -- extra cool -- it also has a "Pop In Studio," allowing families to get imaginative for only $5 per 30 minutes of play time. I really appreciated the staff teaching me how to work with my daughter. For instance, one lady showed me how to explain the glue to my 19 month old and how the glue holds the art cut-outs onto the paper. She also showed me how to help my toddler use little tots' scissors so that Little K will develop hand muscles. Art Mix gets a thumbs up. Thanks for creative play time!

Until the next nap time...
Posted by Kids Activity Queen at 12:36 PM No comments:

What are you most thankful for this Thanksgiving? I love this time of year because most of us have a long weekend to stop and think about our blessings. It's no surprise that on a blog about kids that I'll say I'm most thankful for my family. It's true though. After losing a close friend this week, the value of family has been quite evident to me.

Thanksgiving gives us the opportunity to spend more time with our loved ones... however you define your family. If you're looking for family fun in Houston, here are some great ideas.

Thanksgiving morning at 9 am is the Thanksgiving Parade, underwritten by HEB. The parade begins on the east side of downtown, traveling 20 blocks starting at Minute Maid Park at Jackson and Texas. I always suggest taking families with youngsters to the beginning of the parade route. This allows the kids to see the parade participants when they're fresh AND prevents long waits before the parade arrives at your spot. The parade is FREE unless you want reserved seating. For $21 each, grandstand tickets are located in the TV Zone in front of Minute Maid Park at Jackson and Texas. Scheduled performances will stop in the TV Zone to be filmed for the television broadcast. For $13 each, reserved Turkey Seats are located outside of the TV Zone along Texas Ave between Jackson and Crawford. Performers will not stop outside of the TV Zone but you will have a guaranteed seat with great viewing as the parade passes by. I suggest heading downtown and not worrying about buying tickets. If you wake up late, you can still catch the parade on channel 11, KHOU. Parking is available along the parade route.

If you're not a morning person, don't worry. Another favorite is the Uptown Holiday Lighting Ceremony. The evening of Thanksgiving, the City of Houston kicks off the holiday season in grand style with the lighting of S. Post Oak Boulevard in the Galleria area. Fun for the entire family, Houston lights its outdoor Christmas trees and decorations to turn bustling blocks into glistening gems. Typical features include performances by local choruses, brief reenactments from the Houston Ballet’s Nutcracker, and a fireworks display to conclude the evening. Parents can purchase hot cocoa and cider from some of the nearby hotels. Children love the holiday souvenirs that vendors sell on the street. And, of course, Santa makes an appearance as well. Holiday music and concessions start at 4 pm. The band starts at 5 pm and the fireworks begin at 7 pm. This is another FREE activity for families and it's a wonderful holiday jumpstart.

Many blessings to you & your family this Thanksgiving. Until the next nap time...
Posted by Kids Activity Queen at 1:14 PM No comments: 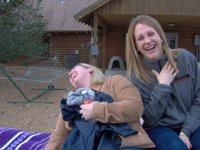 Those are important words to learn at any age. I'm again learning them as I received news earlier this evening that my high school friend Kelly (Plummer) Lester passed away from liver cancer. Why do I bring this up on a blog about raising Houston kids? One: it's obviously on my mind. Two: it's the lesson we all learn again and again: live your life so you are not sorry for regrets. Live your life to its fullest.

My friend Kelly was a sassy gal who didn't take grit from anyone. Even in her last days, she made sure her husband was clear: she did NOT want to be buried wearing panty hose! That's my friend Kelly. But for parents, at least one lesson is to show our kids that life is short. (Kelly died at only 31 years of age.) Live life to its fullest and don't hold back. God didn't put us on this earth to live with a barrier around us or to live with hesitation. Instead, God said "here is everything for you to enjoy. Live." Enjoying life is so much more rewarding than worrying about the next test at school, wearing the right clothes or being popular. My friend Kelly thumbed her nose at all of that and instead loved life. When she could barely utter a word, she told another friend: "It's been a good ride." I choose to remember her that way. How will your children remember you? Add your comments to this blog to share with me & others your thoughts on the importance of being a good influence on living life. I hope to hear from you. 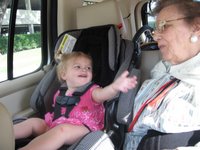 A salute to my Grandmother Frazier, who turned 93 this week, and to my friend Kelly, who was a great example of not letting life hold you back from enjoying it all.
Posted by Kids Activity Queen at 10:36 PM 3 comments:

With a family full of teachers, I spoke with one of my aunts to learn how she explains Veterans' Day to her students. In turn, Aunt Kenny explained that she focuses the discussion on the fact that veterans and soldiers aren't always carrying a gun. She then asked her class of third graders to write an essay on the importance of Veterans' Day. I've included some excerpts of these essays below to give parents insight into childrens' thoughts on the war on terrorism and Veterans' Day. I have not corrected any spelling and grammar because I think the real copy shows how even young children hear the words adults use and have some grasp of what these words mean even when the kids are so young that they're unsure of how to spell the words.

"We honor the veterans because they fought for us and served in the war. They also protect us. That is why we honor them. It is very important to thank them for protecting the U.S.A. My grandpa served in World War II."

"I think we should honor veterans day because they try to keep us safe and try's to help are contry. I think veterans are people that helps us and do good things for us. If we didn't have veterans I don't know what we would do because they fight for us and saves are contry." - Shelbi

"We honor our veterans because they fight for our freedom. They protect our country. Some have been injured and some even get killed in war. Thank you, veterans for your service." - Sloane

"We honor are veterans because they risk their live to fight for the contry we LOVE and some times they die from it so we honor them. But they do not only fight. They can help them when they are heart and be a veteran." - Hannah

"If we didn't have soldiers we would be sick and if no war fought for us, Europe and other countrys would be controling us and we would not have any freedom." - Ciara

"We honor Veterans day because they fought to free are country. I hope we win all of the wars. I hope we beat the terist. Go USA!!!" - Brendon

"You should honor veterans because they at least served in war, helped get things read, and lots more. Veterans Day honors people like the unknown Soldier who fought in world war I. The veterans died to put world to peace. That is why veterans day is so important." - no name listed

Show your gratitude by attending Houston’s Veterans’ Day Celebration. On Saturday, a commemorative ceremony will take place from 10-11 am at Hermann Square in front of City Hall at 901 Bagby Street. At 11 am, there will be a moment of silence to honor all veterans and the signing of the WWI Armistice. A flyover will occur at 11:30 am, kicking off the parade, which will begin at Texas and Smith, head down Smith to Lamar, turn right on Lamar and conclude at Bagby Street. A post-parade "Rally for America" will culminate on the steps of City Hall. Our veterans deserve recognition and thanks. Your children will emulate your gratitude.
Posted by Kids Activity Queen at 2:40 PM No comments:

Fun activities for the whole familytake place throughout the day. Beginning at 9:15 a.m., as soon aspeople walk in the door, children will have an opportunity tomeet Curious George™, take a photo with him, and participatein art activities. Direct from New York, the FunkeyMonkeys makea much-anticipated return engagement for two live performances at10:00 a.m. and 4:30 p.m. FunkeyMonkeys is the brain-child ofJosh Sitron, former composer for Dora the Explorer. Their livelyconcert will entertain and connect with kids, their parents andgrandparents.

Author Diane Levin Rauchwerger will speak abouther new book, Dinosaur on Hanukkah at 11:45 a.m. andHouston’s own Ellen Leventhal and at 1:30 p.m., Ellen Leventhal and Ellen Rothberg will speak on their first release, Don’t Eat the Bluebonnets.In addition to the concerts and author talks, Dan “Dante”Gordon will tell tales, Nitsana Lazarus will sing with herpuppets, and the Mad Science of Houston folks will entertain andeducate. To buy tickets for the concert or for information visit www.Jcchouston.org or call713-551-7255
Posted by Kids Activity Queen at 8:37 AM No comments: