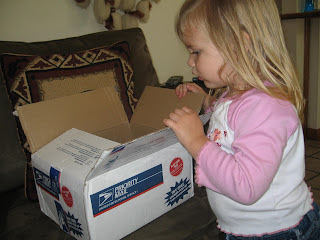 "Princess Pink Petal" is how the package was addressed. I smiled when I saw this weight-y box that the US mailman handed me, curiously.
"It's from my grandfather in Ohio," I said. "To my daughter."
Little K transforms into Indian Princess Pink Petal whenever we braid her hair. A few weeks ago, my mom told her that's how the Indians (Native Americans) wear their hair. Princess Pink Petal's imagination ran wild -- even at 2 years old. The true story began many moons ago when my own mother thought one of her dresses looked like that of an Indian. She loved to braid her hair and imagine that she was living in a teepee. While the heritage is distant, my mother in part Algonquin Indian. So when the days came for me to have my hair braided in preschool, I grew into Princess Blue Blossom. The "BL" sounds also helped me practice the "BL" blend/sound since I had a lisp. I often called myself Princess Boo Bossom but whatever.
Yesterday, the story continued in another generation with my 2-year-old. This package, that was so discreetly assembled with more tape than the post office, was "so heavy" the little princess said. She couldn't hold it up on her own so Blue Blossom helped her. Carefully cutting the tape, we made sure not to pierce the contents of the enchanting box. You could almost hear the rolling beat of the Indian drums in the background. Red Chief (my husband who's a red head) ate dinner & laughed. Inside was another box.
Again, we diligently opened the box to discover a gift only PaPa Don could have sent. It brought back memories of our Ohio trip so long ago... in early June 2007. It was a giant supply of dried cherries - the crowning fruit of every young princess. And as Blue Blossom opened the bag of the jewels, her young daughter's eyes grew wide with delight.
"Mine," she cried. That should translate in any language or culture. I laughed & said, "Yes, your cherries from PaPa Don."
Princess Pink Petal smiled with a mouth full of cherries. Yum. As the sun set in the Houston air, it was another good end to the day.
Until the next nap time...
Posted by Kids Activity Queen at 3:11 PM 1 comment: