There's a lot of anticipation (this week's vocabulary word) about the American Girl Doll store in Houston opening this weekend. If you're looking for things to do with your daughter, grand daughter or special little girl in your life, this is the place to be. That said, I'd appreciate it if everyone didn't show up since we'll be there and I suspect it's going to be crazy crowded. :-)  Here's an email that I sent Friday to my mother-in-law since she's driving up from Galveston to join us at the store opening. Are Little K & I over-the-top? Highly likely. 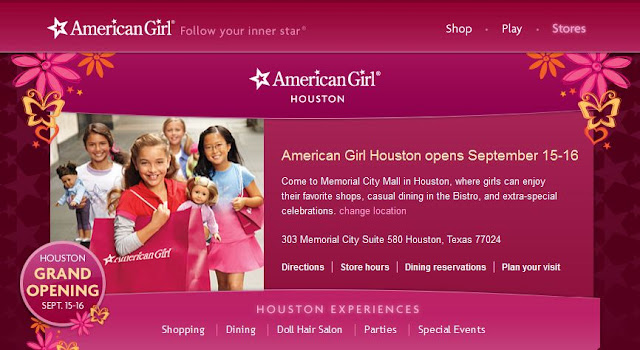 The email:
"Little K reiterated this morning that she wants us to get up on Saturday by 6:30 am, get dressed, grab food and head to the Mall. You may have picked up on her excitement.

The mall staff emailed me this: "The nearest entrance to the American Girl store is on the west side of the mall that faces Gessner.  The mall does open at 10AM that Saturday but the American Girl store will be opening at 9AM.  Mall entrances are unlocked at 5:30AM each day so that will be the earliest you will be able to access the mall that morning."

I did NOT tell Little K that the mall opens at 5:30 am for fear that she'd want to arrive at that time! I suspect there will be a line so that's the real reason I'm willing to go early but why don't you just call or text me (832-256-6676) when you arrive... at a decent hour. I promised Little K that we could get (her doll) Kaylee's hair redone and I imagine that'll take a while. So, I plan to let Little K look through the store until the hairdo is done. Little K has already circled numerous items in the American Girl Doll catalog that she wants for Christmas so I'm hoping to get a few things this weekend and hide them until December.

I'd love to take you & Little K to lunch somewhere nearby. (My mom will be at the ranch. Bummer.) Apparently, the store has a deli/restaurant but I couldn't make reservations online, which means it's probably going to be a mad house. We can find another place out of the bedlam to eat our lunch.

I told Trent that I've never been to a store opening so I figure I'll embrace this 100 percent. "Of course, you will," he said. I think he's a tad nervous that in years to come a high-end jewelry or clothing store will open and Little K & I will decide that we need to spend a ton at the store opening. In all honesty, she'll only be 7 years old for a bit longer and she'll only be an only child for 6 more months so I'm doing these special, one-on-one things as much as I can. I'm thrilled that you are going to be able to come. Thank you for being a part of it -- again, at a decent hour.

As it turns out, there have been some procedural changes with the grand opening, which you can see at http://www.americangirl.com/stores/location_hou.php. My poor husband Trent & I will head to the mall tonight (while Little K stays with a babysitter) so that we can get entrance tickets for Saturday. I'm getting nervous about what exactly I've signed myself up for.

I'll post photos later on Saturday and share any tips (or hazards) that I discover. Here's to a successful store opening!

Until the next nap time...
Posted by Kids Activity Queen at 10:30 PM No comments: