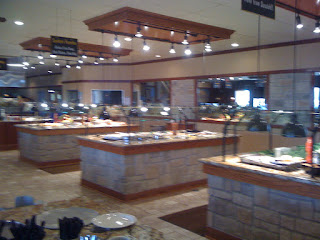 We recently tried the new Ranchero King Buffet on 5900 North Freeway (south of Gallery Furniture) and were pleasantly surprised. The interior was decorated much nicer than competing buffets. The lack of platic seating was impressive. The hunters lodge theme was a good change. I couldn't believe how many buffet stations they had either. You can only see three in this photo, but they also have a taqueria station and salad bar. Fresh food is brought out every 30 minutes so you avoid the food dried out by heat lamps that's common at other buffets.
I was hesitant to try fish from a buffet but the manager highly recommended it. I tried the cilantro salmon and was pleased. The corn bread was also delicious. The assortment of vegetable options and meat options was super. I think this would be a great place to take families so everyone gets their favorite. The pricing is competitive with other buffets in town, or so I'm told 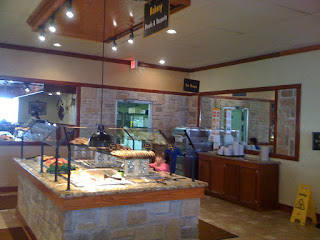 by my husband
Kids will especially like the dessert bar (see photo at left), that has everything from soft-serve ice cream and cookies to cinnamon-sugar churros. With no extra charge, try a few to pick a new after-meal favorite.
Until the next nap time...
Posted by Kids Activity Queen at 11:03 AM 5 comments: