How can you combine art and history for kids in Houston? Houston has some really interesting statues but some are more fun for young kids than others. Yesterday, Little K, her daddy and I went to visit the Presidents Heads, as I fondly call them. For those of you who frequently take I-45 into downtown, you likely see a sampling of the Presidents Heads that I'm referencing. Each time we drive by this small section on I-45, Little K and I shout "Hi, Presidents Heads!" I'm not even sure how that started but it's funny so I keep doing it.

Years ago, Little K and I made this same trip to artist David Adickes' outdoor studio, but there were significantly less statues and my daughter now doesn't remember that. (I think she was only three years old.) 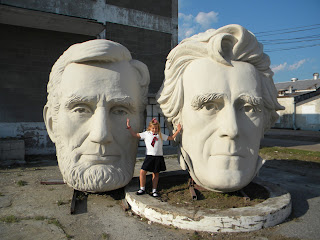 The studio location is just south of the Target store on Taylor Street (near I10) and very close to downtown Houston but you have to search a bit. You may recall a warehouse area near there. That's where you'll aim. You only need 10 minutes to browse the statues, although you could spend much more, if you want. Little K thought these statues were really cool, especially when we examined how the eyes were constructed. It looks like instead of coloring the irises, Adickes and his team carved that area deep into the structure so that the dark shadow would give the appearance of a darker color. Clever. 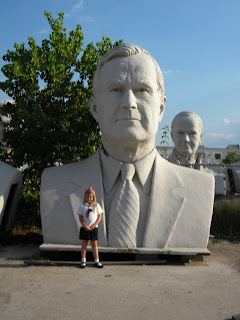 This visit also presents a history lesson since few kids would know who all these individuals are. Not only did we tell Little K about who they were, but also what great things they did. The statue at left of Little K and President Bush was perhaps only their first meeting. (wink). The larger than life size of these statues seems to emphasize the importance of the individuals. It also grabs your attention, no matter what your age.

There were a handful of these large statues for close-up viewing as soon as we pulled into the studio yard (as shown at left). Numerous other statues would cordoned off behind a metal fence. I'm not sure why that was and there wasn't anyone available to ask. There were a few "other" statues, of course, like the "We Love Houston" sign and the statues of the Beatles rocking out on guitars. There's something for everyone. 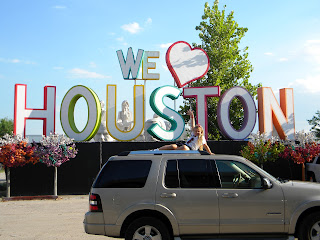 One of the best things about this trip is that you can easily weave it into a trip to Target, the bank or a restaurant on nearby Washington Avenue. I know many parents feel like their schedules are already so jam packed but this is easy to incorporate and break up the monotony of routines. Why not take your kids and see how many statues they'll recognize? Surely, they'll at least recognize the newest addition, President Barack Obama. Let me know what your kids say.

Do you have other statues in town that your family likes to visit? Share it here.

Until the next nap time...
Posted by Kids Activity Queen at 2:25 PM No comments: