What are some of your favorite memories with your grandparents? 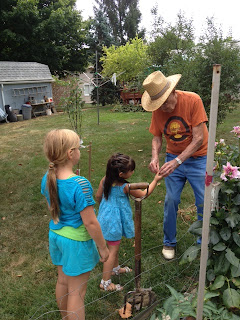 I've already received a few emails from our Ohio family, retelling me today's events. (I keep those emails in a Word file so that I have a chronological capture of so many of our memories. I suggest you do that with any emails you get from special relatives in your lives. Mine dates back to 2004 and it's awesome!)

Apparently, the day started off with PaPa Don warming up his old bod in his hot tub. He was enjoying the quiet while Grammy began breakfast and laundry. (It's Monday after all.) My mom/Grand was showing. As PaPa Don soaked in the warmth of his hot tub, he casually wondered where Little K and her sidekick cousin C were. "Seconds later decked out in their bathing suits, they were at the tub, and  ready to go," he said. 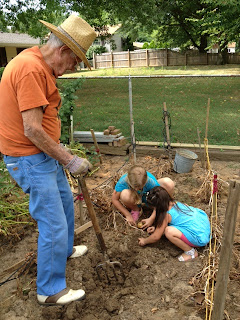 Later, the two young girls and their PaPa Don ventured to the garden in the backyard. For years, I helped PaPa Don pick the pea pods from the vine & sang a special "pea picking" song that the great gardener wrote. One year (like this one), we had no peas to pick upon my visit to Ohio so PaPa Don had to write a new song. I'm told the girls sang this one today as history repeated itself again.

"This summer I went to Ohio.
I went there to help PaPa pick peas.
The rabbits arrived there before me.
Dig taters 'cuz there ain't no peas. 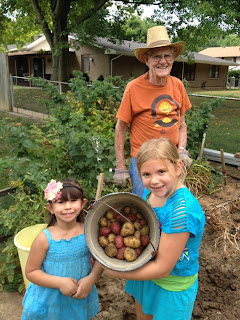 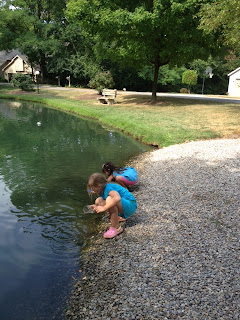 Digging potatoes there is much more of an adventure than you might think. When you find a huge one, you yell "MONGO!" When you find a small one that one be good for a pot of soup, you yell "SOUPER!" There was a lot of "MONGO!" screaming today, although I'm not sure the girls adhered to the size policy. :-)

Ah, yes, we're a colorful bunch but we have GOOD stories to tell. At left, Little K and Cousin C show off their bucket of white and red potatoes. Good thing my girl is Irish!

Later, Grand took the girls on a walk down the street to the pond, where they could feed the fish. It's a stark difference from the hustle and bustle of Houston. It's a bit cooler too but not much.

Looking at these pictures, I remember the time I took my aunt's dog down to this same pond. At the time, there were ducks there. The dog decided he needed to go after the ducks but, unfortunately, I was at the other end of the leash.

Suffice it to say, I ended up in the pond, soaking wet, with only one "Jelly Shoe" on a foot. The other was lost at sea. 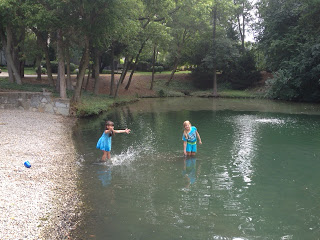 I hope this encourages you to go out and do something similar with the little ones in your lives. You don't have to spend a lot of money to create wonderful memories with your loved ones. I think you just need an adventurous spirit and a willingness to get your hands a bit dirty.

How Do You Welcome Your Extended Family to Your Home? 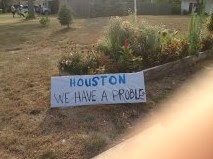 So my grandparents are pretty silly. EXTRA silly for their great grandkids. Little K and I talked on the phone Sunday night after she had arrived at my grandparents house in Ohio.

"Did you check your email?" she asked me. 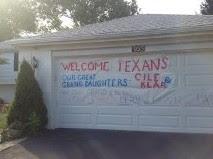 I then did. The photos at left are the surprise I found in my in box. It seems PaPa Don created some welcome signs that included purposeful misspellings of my daughter's and niece's names, not to mention the misspelling of his own daughter's name (Dawn). Hee hee.

It looks like they're up for a week of fun. Little K already informed me that she picked fresh tomatoes from the garden and that she's looking forward to Grammy's homemade biscuits and gravy and to PaPa Don's infamous pancakes. Oh, I'm really wishing I had made this trip. Yes, I have those memories too, so I suppose it's time for Little K to have her own. Still, there are some things you're never too old to enjoy. :-)

What fun memories do you have with your grandparents? As parents, do you encourage the grandparents in your life to make funny memories with your kids?

Until the next nap time...
Posted by Kids Activity Queen at 8:00 AM No comments: