I Eat the Peas. PaPa Don eats the Pods & more from Ohio

Not everyone gets to know their great-grandparents but Little K is different. On Friday, Little K and I flew from Houston to Dayton, Ohio, where we were greeted by PaPa Don & Grammy (my mom's parents).


Now I have to fill you in on the lead up to this trip. As a child, I'd visit Ohio once each summer to bake with Grammy and pick peas in PaPa Don's garden. PaPa Don even wrote a song about our pea-picking adventures that detailed how I ate the peas and he ate the pods. As I grew older, who ate the pods became a bit of a game.
Today, Little K continues by telling PaPa Don that he's stuck eating the pods because she eats the peas. Weeks before our "trip to Mecca", PaPa Don sent her a name tag. He said he hadn't seen Little K in SO LONG that he might not recognize her without the name tag. Artificial pea pods hung from the necklace-like name tag which read: "Hey, PaPa Don. It's me, Little K. I eat the pods." My whipper-snapper daughter quickly instructed me to edit the name tag so that it correctly read "... I eat the peas."
So yesterday, Little K ran to PaPa Don & Grammy, wearing her edited name tag AND a T-shirt that read in large pink letters: "I eat the peas. YOU eat the pods." PaPa Don's camera snapped photos quickly as his great-granddaughter sported her digs. Somehow, I don't think we'll forget the "gotcha" moment at the Dayton airport.
Before heading to PaPa Don & Grammy's house, we stopped by Aunt Kenny and Uncle Brad's house for a delicious chicken dinner. Cousin Lauren, called "the other kid" by Little K, was soon convinced to participate in drawing instructions led by the youngest family member. Interestingly, Lauren is no little kid. She graduated from undergrad at the University of Miami in Ohio in May and will work with children with ADD and ADHD in Cincinnati starting next Monday. Still, she must have been the next youngest attendant at the dinner party so Little K immediately took to her.
The teasing continues today. Uncle Sean made an appearance after riding his bike to PaPa Don & Grammy's house. P U! After Little K scarfed down all the raspberries by herself, we picked peas in the garden. She repeatedly scolded her mother for eating them, saying we needed 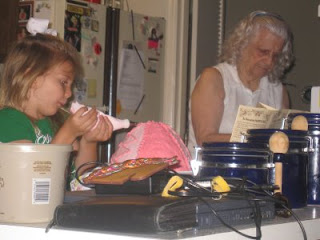 to save them for inside. She clearly doesn't grasp the concept of finding the fattest pea pods and eating them before PaPa Don does. I, on the other hand, remain the master. We also picked more raspberries and a bright red tomato (for you Mom).
Next up, we began baking a chocolate cake that we later frosted into a 3D Barbie doll cake wearing a pink sun dress. Grammy & I shoved her into the freezer so her icing wouldn't melt. (It's in the 80s here today.) I joked that the two old bits got tired of the pretty princess with the skinny waistline so we SHOVED her in the freezer. It felt good. 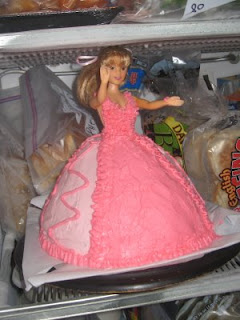 A quick trip to an estate sale resulted in treasures for PaPa Don and a cross necklace for K. Who knew $1 necklace would bring so much joy?
Tonight, we'll have ham and stuffed mushrooms with the greater Ohio clan, followed by the dissection of a pink Barbie doll cake. If I don't gain 5 or more pounds this trip, I'll be floored. But the memories are sure to last a lifetime. If only everyone was as blessed as we are.
Until the next nap time...
Posted by Kids Activity Queen at 4:38 PM 3 comments: