A Blast at Dickens on the Strand 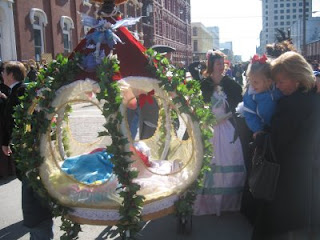 Last Saturday, we had a ball at Dickens on the Strand. I was a bit worried about navigating the crowd (especially since my husband had to work that Saturday unexpectedly) but I was pleasantly surprised. We arrived just after 10 am when they opened the gates and walked the Strand. There was a constant line of sight seeing for sure. My favorite was the Princess Baby in the gorgeous coach. In the photo here, you can see Little K and her Cici peeking inside at a real child. Oh, how I would have LOVED to have a stroller like that when I was younger.
We also saw a quick magic trick by a goose, who couldn't lay a golden egg, but could find a candy cane for my daughter. That goose seemed to 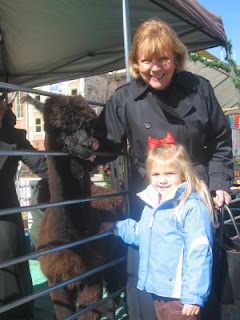 know my daughter's preferences.
There was just so much to see... from the costumes and St. Nicholas' appearance to the Alpaca named Cici. (That's what Little K calls her paternal grandmother --also pictured -- so it was quite coincidental.) Interestingly, alpacas hum. Who knew? Their fur is super soft and great for blankets.
Next, we ate corn dogs and fresh lemonade. Little K even tried her first Funnel Cake with Cici. At last, we found a kind of cake that my daughter likes. She scarfed it right up.
We enjoyed the real wedding Dickens-style at noon and then decided just to sit for awhile, listening to gorgeous singing. The carolers were the good dose of Christmas that I needed.
Finally, a magician/trickster appeared on stage and performed various juggling acts and tricks. Our favorite was twirling the rope around 5 people and then watching each person slowly sneak out from beneath the rope without touching it or messing up the roper. Of course, we liked that trick mostly because Little K was 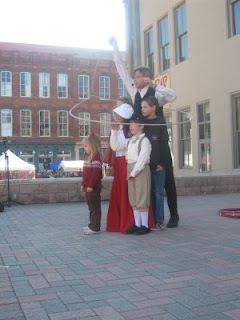 one of the stars. (See photo below. She's the tiniest one.)
Any ways, if you didn't make it to Dickens on the Strand this year, mark the first weekend of December on your list for 2009. It was a wonderful, calm day that supported Galveston's Historic District. It was hard hit by Hurricane Ike but is coming back, thanks to people like you.
I also took photos of the west end of Galveston... the devastation from Hurricane Ike remains. I'll post those later this week. I'm still in awe.
Until the next nap time...