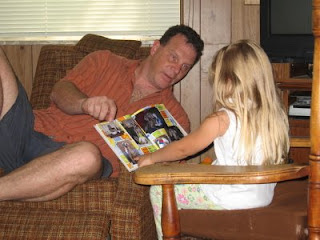 Day 1 in Ohio was fun but traveling with a 3-year-old who didn't nap is exhausting in itself. Little K was well behaved on the plane, singing to everyone on board. We landed just before 5 pm and were picked up at the airport by PaPa Don & Aunt Margaret. Little K proved to be on her 2nd wind as she was "jabber jaws" for the 30-minute ride home. One mile before we arrived, she was dozing off.
Later, Aunt Margaret had a special drink so Little K decided she also needed one. Sans alcohol, Little K soon had her own tottie -- a caffeinated drink. She was all performance at dinner at a seafood restaurant with multiple saltwater fish tanks. After dinner, Uncle Brad insisted he & Little K needed ice cream, although the rest of us were stuffed beyond belief. A short visit followed dinner back at Grammy and PaPa Don's and then we all retired to bed. I looked forward to a good night's sleep, but Little K was overly tired and woke up about 10 times last night. Oh well.
Today, Day 2, Uncle Huck read Little K a book about his dogs in Vegas. (See above. This is my mother's youngest brother Shannon, whom we call Huck.) It was too cute of a photo opp not to take. Aunt Kenny rode her bike over to visit and then cousin John stopped by to update us on his college registration at University of Kentucky in the fall. Wow, how time flies! We picked peas today. K especially liked cousin John tossing peas into the air for her to catch with her mouth. What a show! Uncle Huck & Aunt Margaret headed back to Vegas today but we were lucky that our trips to Ohio coincided. Perhaps we'll be able to venture west this year. 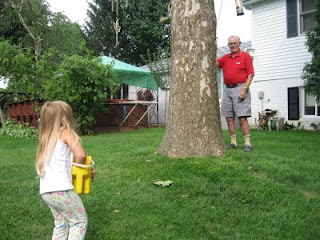 After naps (including mine and PaPa Don's), we fed the birds and filled the hot tub. K discovered two ducks in the yard so we quickly pulled out some bird seed to fill them. As I sit hear typing, "When Irish Eyes Are Smiling" plays in the background. Aunt Kenny, Uncle Brad & John will join our Barrett group for dinner tonight. How blessed we are to have such family and memories. What will tomorrow entail? No clue. Talk to you then.
With love... until the next nap time...
Posted by Kids Activity Queen at 5:32 PM 3 comments: