ART FOR ALL HOUSTON invites you to join its exciting FALL CLASSES!

Classes begin THURSDAY, SEPTEMBER 10TH and will study CAVE PAINTINGS TO PICASSO, a historical view of art through the ages. The class will study art history and art making through the masters and end the semester with a trip to the Museum of Fine Arts Houston (MFAH) to view the works in person.

Location: Chapelwood Methodist Church
Plus, ART FOR ALL ANNIVERSARY ART SHOW (including all current and former students)
will be held on TUESDAY, SEPTEMBER 29th 6-7 PM.

Last day for registration is SEPTEMBER 2, 2009. Visit the Web site and register with your credit card by using PAY PAL.

Until the next nap time...
Posted by Kids Activity Queen at 10:53 AM No comments:

Labels: things to do in houston 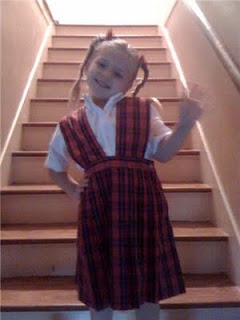 Yes, we've been quite busy with the new school year starting and Little K's entrance into Pre-Kindergarten. The requirement to be there by 7:45 am is difficult for both of us and we both miss our play time but are finding ways to squeeze it in after school and on the weekends. Thank goodness for that book. Smile.
I must be a nerd for uniforms and packed lunches because those are two of my favorite things so far. Weird. I love how all the kids look in those St. Rose Catholic School uniforms. The funny thing is it's the same uniform that my sister and several of my friends wore at St. Cecilia. My emails to girlfriends have really made them laugh.
Little K keeps telling me that she's not allowed to have a cookie in her lunch box which is not true. She's the only child who does not want dessert, I'm sure. Our school has done a great job of keeping her away from peanuts and peanut products due to her allergy. I think it's been a big shock to the school staff but they've been so accommodating. We are so blessed!
How has your school year started out?
Until the next nap time...
Posted by Kids Activity Queen at 6:49 PM 2 comments: 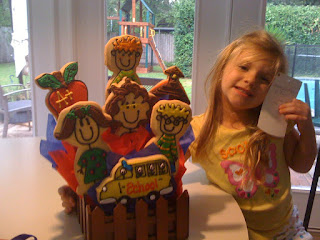 With the new school year comes "Meet the Teacher Day". My Little K is beginning PreK and I think I'm more nervous than she is. We'll be off to our, I mean HER, first day at PreK. It's only a half-day so we can get the hang of things. I'll share updates soon.

A big thanks to my Mom who spent the day with Little K on Wednesday while I went to work. It was good to have that special time.

Another big, tasty thanks to Cici & Popi for the delicious school-themed cookie bouquet that arrived yesterday for my new student. Little K enjoyed eating the tires off the school bus last night and then devouring the driver. (smile).

Until the next nap time...
Posted by Kids Activity Queen at 7:07 AM 2 comments:

My mom teases that instead of having a second child, I bought a dog. Thus far, she's right. The thing is, I don't remember Little K being half the trouble of this dog. At least when she was 6 months old, I could keep up with her and even place her in a play pen so I could relax a bit.
Not with Dutch, our Rhodesian Ridgeback. Last night, he mutilated Arthur the Stuffed Bear that's been with me since 1997. Arthur went to my mom's house today to undergo surgery, I mean, sewing treatments.
This evening, after an all-day strategy meeting, I carefully placed my brown high-heels on the counter and made dinner. I ran upstairs to check email before my Mom brought Little K back for the day. When I returned downstairs, I not only found the blue accent 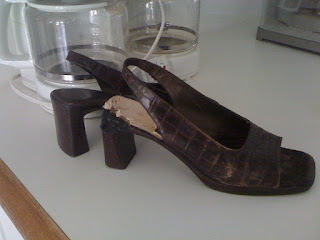 pillow from our bedroom but also part of my shoe. (Other parts of the shoe were scattered throughout the den.) The dog looked at me and seemed to say "Look, Dad came home to walk me at lunch. Where's YOUR love?"
The dog is now outside while I sip on chardonnay and await my darling 4-year-old Little K. MaMa needs a new pair of shoes! And this could get expensive.
Until the next nap time...
Posted by Kids Activity Queen at 5:51 PM 1 comment:

I think this looks like a fun thing to do with the kids.

HOUSTON—Explore the animal kingdom with Animalopolis, a “Seusssian” style film, done in rhyme and verse, presenting 13 different wild animals as they are found in their natural habitats. Viewers get a unique perspective of the beauty of these magnificent creatures, from the glory and majesty of lions, to the sleek grace and beauty of cheetahs. Other animals such as polar bears, crabs, sea lions, rhinos, hippos and zebras are also captured on film.

“Animalopolis is a unique, hilarious IMAX that makes learning fun,” said Charlotte Brohi, vice president of IMAX operations. “This whimsical look at the real world of animals as they play in their natural habitat not only reaches out to parents and teachers alike but engages even the youngest of audiences who are sure to giggle, cheer and clap throughout.”

Animalopolis focuses on the lifestyles of 13 unique animals, sometimes ascribing human-like attributes to the animals to allow the audience to relate to the personalities of these creatures. A lion bursts into opera, singing “The Marriage of Figaro” to his pride. Sea lions turn somersaults and bears dance the waltz. This film is ideal for both the young and the young at heart. The animals are presented in a fun and humorous way, with just enough information to spark the viewers’ interest without dampening their desire to learn more.

Animalopolis director Tim Huntley, is an Academy Award winner for “Up,” a live action short, and has also received an Emmy and three additional Emmy nominations.
See more, hear more, feel more in IMAX®. For tickets, or more information, visit http://www.hmns.org/ or call (713) 639-4629.

The Houston Museum of Natural Science—one of the nation’s most heavily attended museums—is a centerpiece of the Houston Museum District. With four floors of permanent exhibit halls, and the Wortham IMAX® Theatre, Cockrell Butterfly Center, Burke Baker Planetarium and George Observatory and as host to world-class and ever-changing touring exhibitions, the Museum has something to delight every age group. With such diverse and extraordinary offerings, a trip to the Houston Museum of Natural Science, located at One Hermann Circle Drive in the heart of the Museum District, is always an adventure.

Until the next nap time...
Posted by Kids Activity Queen at 2:48 PM No comments:

My little girl starts PreK next Friday. Wow! How time flies! I'm excited about the opportunities that this presents from the Christmas concert to learning to read. Still, I'm realizing that I'm holding onto her more than ever. My sweet little girl is growing up so fast. And I'm not crazy about not being able to "play hookie" whenever we want. I know, I know. Make the most of your weekends. We will.

My mom also mentioned that children often react to big changes like school starting in different ways. Some kids crawl into bed with their parents. (Wait. Little K started doing that last week.) Some kids start wetting the bed. (Okay there.) Others might just be more snuggly than usual. (My daughter is definitely doing that but it could be instigated by her mother.)

What are your experiences with this? Did your child react in a surprising way when he/she started elementary school? I want to hear from you. Tips?

Until the next nap time...
Posted by Kids Activity Queen at 1:39 PM 1 comment: