Well, the kids trip to visit their great grandparents has been quite the story throughout the extended family. I received an email today from the patriarch himself saying that I need to post more photos to FaceBook so two of my aunts could see what's going on. I was also reminded by PaPa Don that one particular Aunt Margaret has an extra special relationship with my PaPa Don since marrying the youngest of my uncles.

Not to be overshadowed by this lovely woman, I fired an email back: "Well, I'm happy to share any and all photos. BUT let me say this. I love Aunt Margaret but remember I'm still #1. :-) I don't think she knows how to make a good drink like I do and she's never dyed your hair red or married you in the middle of a department store. Hee hee."

PaPa Don's response: "the competition has increased since you were a munchkin." Nice.

Now onto the day's updates and more fun things to do with your kids. I'm told it rained all day in Dayton, Ohio and the adults were worried about what a 7-year-old and a 4-year-old would be able to do. Silly, silly adults. 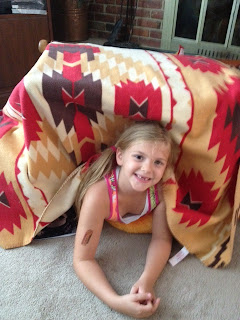 Like we often do in Houston, Little K jumped on the opportunity to build a tent indoors. I started that mini tradition when she was younger and scared of the thunder and lightning. Now she just thinks that's what you get to do in a storm. Lately, in Houston, we've had plenty of tent building and it never grows old.

"Another redo for the umpteenth time was building a play house under the big Grand Pa Barrett rocking chair. I commented to your Mom that Little K and C under it (and every other chair in the kitchen) was a repeat of her mother also doing it, as did her mother, and her dad, and his dad and his dad too.

My Trust Agreement states that (Uncle) Don Jr. has first refusal for it. yet I wonder if anyone other than Gram and me recognize that six generations of children have all flipped that rocker over, covered it with blankets, shawls, towels, whatever,.... as it became everything from a playhouse to a rocket ship and all in between." Now that's a refreshing viewpoint. 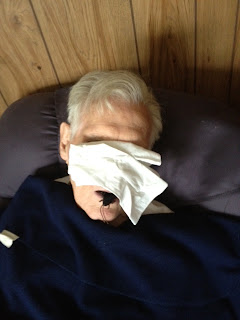 Not all has been peaches & cream during the trip though. When PaPa Don retired for his afternoon nap and carefully spread out in his Lazy Boy Chair in the family room with a cloth carefully drawn across his sleepy eyes to help get some quality sleep, a scoundrel unveiled. It seems my super sweet girl waited until the old man was fast asleep and then carefully put a fake roach atop his snoring mouth. (See left.)
Gad! I bet the poor guy about had a heart attack when he awoke. I could hear the laughter from here. 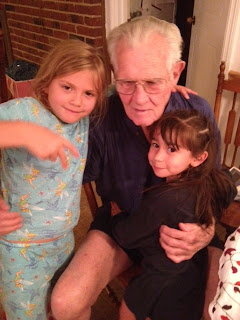 Ohio is an hour ahead of Texas time so it's about time for the munchkins to head to bed. Gotta give kisses to PaPa Don after all the torment he's been through on just day 2 of the summer trip. Good thing only 2 great granddaughters made that visit.
Until the next nap time...
Posted by Kids Activity Queen at 7:46 PM No comments: