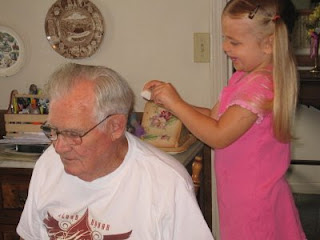 A long history of barbershop continued this morning in Ohio. While PaPa Don read the newspaper, Little K fixed his hair by spritzing it with Princess Spray, combing his hair and then adding a few bows. When PaPa Don explained that boys don't wear bows, Little K said that she'd add a blue bow.
I love watching this. When my sister Colyn & I were young, we'd add creative hairdos to PaPa Don's top, too. If PaPa Don fell asleep (as he often did), he'd be surprised when he awoke. One time, we added red mousse to his hair so he was VERY surprised upon awakening. We've painted his nails before. We even added make-up. PaPa Don says that his ability to fall asleep so easily is due to his clear conscience. I think he secretly may enjoy being donned over by a little princess.
We're off to scavenge at some estate sales. Hopefully, we'll find a treasure or two. More later.
Until the next nap time...
Posted by Kids Activity Queen at 9:44 AM No comments: