Put Your Sunny Side Up 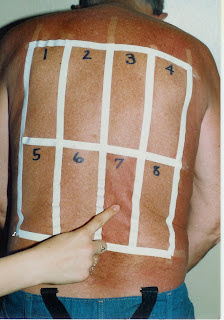 The weather outside is overcast & rainy. The forecast for the weekend doesn't look much better but that's no reason not to think about the sun. Even when it's overcast, folks in Houston need to protect their skin. (I wear SPF 15 under my makeup every day. Little K loves the spray-on sunblock, too. Now if we can just get Little K's Daddy to follow suit!)
My PaPa Don, who lives in Ohio, volunteered for an experiment years ago during a trip to Houston. I was in seventh grade & working on my science fair project, which studied the most effective sun blocks. Again, I reiterate that PaPa Don volunteered for this project. I developed categories on his back to test different sun blocks' effectiveness. I also mimicked this experiment with fabric swatches but there's nothing like a real person who's willing to test his skin. The question at hand: If we used various brands of SPF 15, would any work better than the others?
In the end, Bullfrog Sunblock was by far the most effective. If you ask PaPa Don, in the end, his back looked like a wild man's chess game that didn't fade for some time. But we still have the stories and photos to share. What a hoot!
So when the sun comes out again as it, of course, will do, remember this science fair experiment but don't try it on your kids. Thanks a million, PaPa Don!
Until the next nap time...
Posted by Kids Activity Queen at 3:12 PM 3 comments: