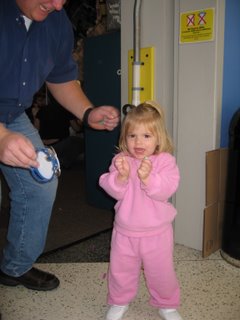 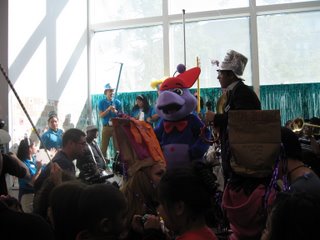 Happy New Year, Houston Families! We joined the fun today at the Children's Museum of Houston for its New Year's Noon party. We had a blast. Little K was not sure what to think at first, but soon she was dancing and throwing confetti with a big smile. Kids decorated their own hats, noting fun expressions like "Wishing 4 Whirled Peas" and plenty of glitter. Others arrived early to design their own parade float. A band from New Orleans got us jazzed into the celebratory mood and led the children's parade to the center of the countdown. A critter from TV station PBS joined the stage and danced around. Then, the countdown to noon began with large glittering signs being held up by the museum staff to help families count down to the New Year. A mock ball was dropped with each count until we reached zero and the sky was filled with confetti. We danced to jazz music and sang quite a bit.

Even if you missed this celebration, our family wishes you a safe & happy New Year! Until the next nap time...
Posted by Kids Activity Queen at 3:54 PM No comments: