I'm a sucker for animals.

How is it that a cat that I've known for less than 24 hours can get me to sob? Well, I took the kitty to CAP (Citizens for Animal Protection) this afternoon. The kitty was so sick that they suggested putting her to sleep. At about 3 months old, the kitten had a severe upper respiratory problem that caused her face to swell so that she could barely see. She also had mange and some other weird things going on. She hadn't eaten anything. If you read my earlier blog entry about this cat, you may be thinking Gosh, this does not sound like the same cat. Well, I'm such an animal lover that I just saw this sweet kitty and wanted it all to be okay. Instead, I'll go pick up Little K from school soon and then we're going to play outside with all 5 of our kitties... and be thankful that they are healthy.

PS - I can't stress enough the importance of getting your cats spayed or neutered. Even if they're not your cats, you can get them fixed at SNAP on Durham (near I10) for little investment and as soon as they're healed, release the cats outdoors. You can take this small step to correct the problem of cats being neglected and over-populating. Okay. Off my soap box now.
Posted by Kids Activity Queen at 3:19 PM 1 comment: 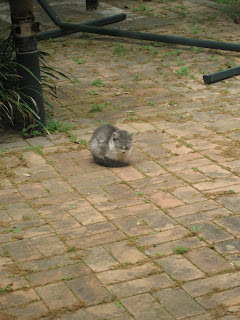 Last night, my husband found this cute kitten in the street. Apparently, the house across the street went through a landscaping makeover and turned up a kitten. Trent picked up the cat to move it out of the street, but then the cat followed my husband everywhere. The cat sat on our front porch crying so we gave it some water and cat food. Since we already have 5 cats, we can't keep this one. (My cousin Jon calls me "Cat Woman.") Unfortunately, I think it might be sick so we need a good home for him/her soon.
IF YOU WOULD LIKE TO ADOPT THIS CAT, please email me.
Until the next nap time...
Posted by Kids Activity Queen at 12:29 PM No comments: 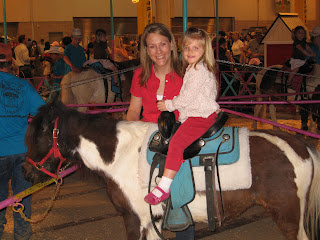 We had a great time at the Livestock Show on Saturday. Little K says her favorite was the pony ride and playing with her cousin Brent. I liked the pigs with their big snouts. Amazingly, Little K did not take a nap so she was exhausted by 6 pm.
Until the next nap time...
Posted by Kids Activity Queen at 12:01 PM No comments: