This week has been a doozy but rounded out nicely. One of my marketing clients keeps flip-flopping on what they want. Another client wants more work done but doesn't want to pay for more hours. Well, I wish I could get more done in the same time, too. Go figure.

Then, Thursday morning my husband Trent was shaving, shook his head and muscles in his neck and back began to spasm. Soon, he couldn't move his neck at all and he was carrying his arm as if it was in a sling. His general practitioner saw Trent at 11:30 am, gave him muscle relaxant and anti-inflamatory pills, and sent him on his way. Trent stayed as still as a statue in the bed for the rest of the day but the meds were not helping.

"Ah, if the pills aren't working by Friday, I'll call the doctor for another prescription," Trent said with a strain in his voice.

Occasionally, his entire body would jerk in pain. Trent said the muscle spasms were going up his spine into this scalp. I asked if it was also hurting his feet because his legs would shake so much. "No, that's just me bracing myself," he said. Comforting, I thought sarcastically.

Trent finally fell asleep Thursday evening and watched my weekly TV shows, and then went to bed. Suddenly, at 2:30 am Friday, I woke to Trent trying to stand up beside the bed but he was in extreme pain. It looked as if the muscles were spasming and shaking his whole body violently. I called my sister Colyn so she could stay with our sleeping daughter. We rushed to the hospital, where we stayed until 5:30 am. Trent was given two Vicodins, a shot of another muscle relaxant and a shot of an anti-inflammatory.

We returned home to discover my sister had taken our daughter to her house so she could get ready for work while her husband headed to work himself. Trent headed to bed while I went to pick up my daughter. 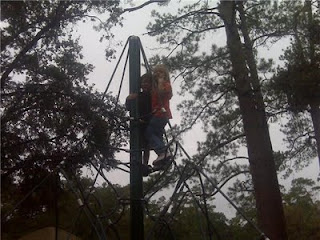 Trent slept all day on Friday but is recovering nicely. He took Little K to the park today to meet some school friends. He looked a bit like Frankenstein, not moving his head much, but his sunny disposition is back and he's feeling much better. One friend even took this photo of Little K and her classmate at the top of the climbing tower. So glad Little K could get down on her own. Trent wouldn't have been much help even today. Many thanks for the thoughts & prayers for his quick recovery.

This morning, I went to a funeral of a 38-year-old father of two kids. He died unexpectedly of a heart attack, leaving his wife and kids. I wish them great strength and hope the community will continue to be there for them. It reminded me that, despite the stresses we've experienced this week, all is well on this home front. If only all were so lucky. Hug your families and count your blessings.

Until another nap time...
Posted by Kids Activity Queen at 3:07 PM 2 comments: