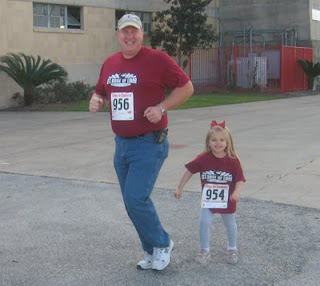 This past weekend was a busy one but so much fun.
On Saturday morning, our family participated in the Steps for Students Run that raised money for our school, St. Rose of Lima, as well as other Catholic schools in the Galveston-Houston archdiocese. Thanks to each of our family members and friends who supported us in this important endeavor. It's an exciting way to exercise as a family and community, while fundraising. (PHOTO: Little K and her Daddy running toward the finish line in February 2009.)
St. Rose School raised $42,000 and was awarded for the most spirit of all Catholic schools (at all levels) in the archdiocese. Wait to go, Cardinals!
Then we made the trip to Galveston for Mardi Gras with Trent's parents, sister and friends. 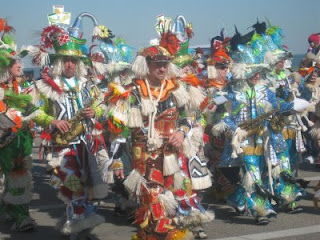 Little K was thrilled when a member of the Momus Krewe threw her a Scoobie Doo doll from the balcony. It cracks me up to hear Little K shout: "Throw me something, Mister!" Ahh.
While it rained a bit Saturday afternoon, the floats on Saturday night were great and I truly enjoyed seeing so much happiness return to the island.
With the Tremont Hotel still suffering from Hurricane Ike, the traditional party was moved to the Hotel Galvez on the Seawall and the hotel's decor inside & out was inspiring. The Momus Parade came revelling down the Seawall with plenty of stops for the crowd in front of the Hotel Galvez. Of course, the parade would be amiss without participation from the Philadelphia Mummers. Their costumes were glorious but we missed their typical dance & jeer routine. (PHOTO: Mummers display full colors of the Mardi Gras rainbow in Galveston.) After the parade, we returned inside the hotel for dinner and chatting. We returned to my in-laws' home around 9:30 pm to learn Little K had been fast asleep under the careful supervision of Miss Margot. 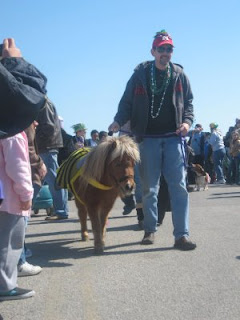 Sunday, we went to the Seawall, where we met cousin Becca and Uncle Owen as well as a few friends. We watched the Pet Parade at 1 pm, followed by the Children's Parade. While the float participants were fewer this year and the pets were more mainstream, it was certainly fun for all. Be sure to mark it on your calendar for 2010. Who knows? Maybe the iguanas will return. Once again, I'm thrilled to report that Mardi Gras in Galveston really is a family affair.
Speaking of which... A special Mardi Gras THANK YOU to my in-laws Steve & Mary Ann, who were again gracious hosts to the festivities.
With Lent starting today, we'll pipe down a little but continue to share plenty of thoughts and encouragements here.

Until the next nap time...
Posted by Kids Activity Queen at 8:27 PM 1 comment: