Review of Lola's Restaurant in the Houston Heights 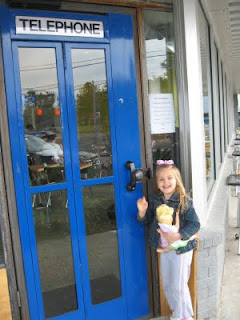 Several times, I drove by Lola's on 11th Street and Yale, and was intrigued by the big sign that hangs above its door. Today, we ventured in. First, Little K and her father remarked at the front door, that is fashioned from an old telephone booth.
"Can you get the phone please?" Trent asked his four-year-old daughter, who has never seen a phone booth. The door handle was an old-fashioned phone. Cute.
I had read on another blog that you need to first order your food at the diner's register. No problem. We approached the counter with really cool wood finish below, read the menus and placed our orders. We then picked a booth beside a window and waited a short time for our food to be delivered to our table. The eclectic place was clean, light and bright. Interestingly, it supposedly was once an old car dealership so I enjoyed taking a few minutes to entertain my imagination.
Little K was delighted with her plate full of 2 big pancakes and 2 pieces of bacon. The taste test passed, too. I really enjoyed my vege omelette, although the accompanying breakfast potatoes, sausage and wheat toast were way to bland. I've had better at my house. My husband ordered a ham and cheddar cheese omelette, specifically asking for the cook to leave off the parmesan cheese. When delivered, the parmesan cheese was included. Trent said it was an interesting kick to the omelette but not what he wanted. Still, I noticed he cleaned his plate, which also included 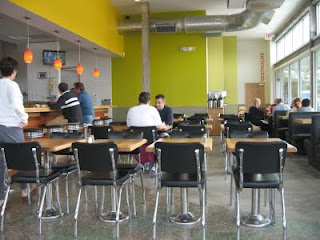 bacon, hash and toast.
Overall, for $36, we felt like the food should have been better. It was average for kid-friendliness ad the food is served quickly and they have a small kids menu, but no kids activities. We agreed we'd be willing to try it again, especially since rumor has it that Lola's has the best chicken fried steak in the Houston Heights. Hmm...
Until the next nap time...
Posted by Kids Activity Queen at 2:23 PM No comments: