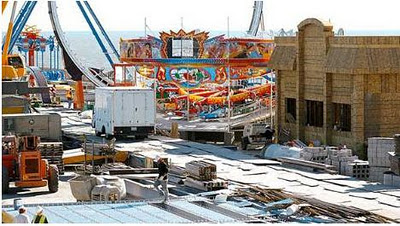 The Galveston Daily News and
KHOU Channel 11 are reporting that Tilman Fertitta and Landry's have already broken ground on a new amusement park for families in Galveston and beyond. "Pleasure Pier" as it will be called will take the place of the old Flagship Hotel, which long-time Galvestonians, Houstonians and many more likely remember. The new project is set to open Memorial Day weekend, which is May 28, 2012.

It brings back the lessons that many of us read about in history class years ago. Galveston once was an entertainment epicenter but all that changed with Hurricane Carla in 1961.

Ushering in a new era for the coastal island, the new park will include a 100-foot tall ferris wheel, a 36-foot double-decker carousel, a 200-foot tall swing (considered the highest ride in Texas), a Bubba Gump Shrimp Co. restaurant, a shopping center and much more. With Astroworld long gone, this looks like a fun place to spend the day or weekend. Come on summer!

Until the next nap time...
Posted by Kids Activity Queen at 4:59 PM 1 comment: 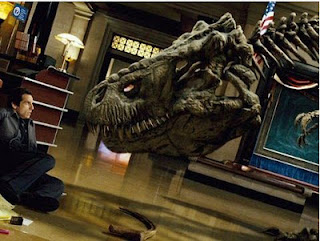 On Sunday, Feb. 5 from 1-4 pm, you can immerse your family in ancient treasures from Greece, Rome, and Egypt!

Create your own clay pot inspired by amazing works of art from ancient Greece, explore Egyptian art at a hands-on Gallery Cart, discover Greek myths at Storytime, and sketch works of art in the MFAH Antiquities collection. Plus, at 2:30 p.m., the Reel Kids Film Night at the Museum starring Ben Stiller will delight families as the past comes to life! Check out the video clip on the museum's web site to see if your child would enjoy this flick.

All activities are FREE with general museum admission. Click here for more information.

Until the next nap time...
Posted by Kids Activity Queen at 11:02 AM No comments: