Professional Photographer in the Making? 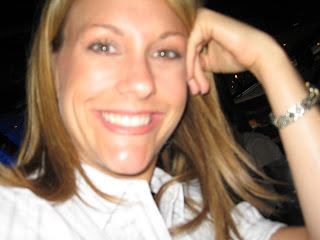 Little K's newest fascination is taking photos with my digital camera. (Thus, this photo of moi. Talk about a close-up shot.) At first, I was hesitant and didn't want her to waste the film.
Wait. What film? If the photo stinks, I'll just delete it.
Now, I struggle with the fact that I don't want Little K to drop the camera and break it. Mind you, I've already dropped it on a playground and scratch the screen.
Fine. Let's just be careful and she can use it.
So now Little K is practicing her photo craft and thinks it's such a treat. Aha! Here's a reward that cost me nothing and won't rot out her teeth. Maybe this is a good idea after all.
Until the next nap time...
Posted by Kids Activity Queen at 4:39 PM 2 comments: