In Three Minutes or Less.. This Could Happen to You

So last night, Little K & I took our baths and then I helped her get dressed into her PJs. When I was getting her PJs out of the drawer, I found some baby lotion that I used to put on Little K as a baby because it smelled so good. Of course, as soon as I explained this to her, Little K wanted to put some on. Fine. "After we put your PJs on, you can put some lotion on your legs and hands," I told her. I even dabbed a bit of lotion into her hands and then put the bottle back in her top drawer.

I quickly ventured to my room to trade a bath towel for my own PJs. I hung up my bath towel in the bathroom and met Little K at the top of the stairs. We headed down stairs for dinner. In three minutes or less, we had dressed and were on our way to a peaceful dinner.

Dinner ran long so at 8:15 pm, our 3 family members headed back upstairs to put Little K to bed. I noticed a slimey handprint on her antique dresser but figured she had too much lotion and accidentally put her hand there. I returned from the bathroom with a damp washcloth to clean it off. As I wiped this solution off the dresser, I realized it was not lotion. In fact, I was smelling a very strong scent of Desitin or something close. Slowly, the confessions began.

I'm told that Little K didn't think she had enough lotion so she opened her top drawer, found some A+D ointment (for diaper rash) and began applying the ointment... everywhere. She not only put it on her hands and dresser, Trent & I discovered globs, big globs, on two of her little chairs and blobbing on the foot of her antique bed. Blah. I was so angry that I couldn't even be groced out. It seriously looked like something from the movie "Gremlins".

Trent & I used numerous (no kidding) wash cloths to wipe the ointment off, noting just how well that ointment repels water. I told Little K that she would not have any TV on Monday and she couldn't go to her friend's house on Tuesday. (Yes, I've already given in.) Then, I told her she "was on red -- big time" like her teacher tells the students when they're not behaving in the class room. I never yelled but I really could not believe my eyes, or nose. Little K hid under her bedroom covers.

Today, the scent of A+D ointment is much weaker but her ceiling fan continues to circulate the air. I threw out the A+D ointment and put the lotion in the bathroom on an out-of-reach shelf. Finally, at lunch today, I explained to my friend Shelly the torture that Little K had put me through and laughed the entire way through the episode. Too bad I didn't take photos of the goop. You know the saying: "One day, we'll look back on this and laugh"? That day is today.

Until the next nap time...
Posted by Kids Activity Queen at 7:11 PM 1 comment: 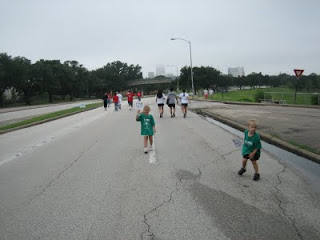 So this Saturday, our family and some wonderful friends participated in the 2.5-mile Food Allergy Walk. The purpose was to raise awareness of food allergies and help fund research to find cures.
OR as one little friend told me: "We're walking so we can get money to give the doctors to help (Little K) not be allergic to peanuts any more." That was enough to motivate me to walk the 2.5 miles, even with Little K on my back for a sizeable portion of it.
I caught myself tearing up when I saw on the backs of our (big & small) friends: "I am walking for Little K.". Ten children and many parents headed down Allen Parkway that gray morning but it seemed like fun for most of us. I even had a small competition with two of the boys. They just 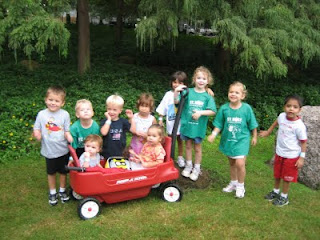 wouldn't let me win.
After completing the walk, the kids pulled together enough energy for several Moonwalks, snowcones and muddy feet (thanks to the light rains on Friday and the Saturday activities in a nearby field). I visited a few small tents that had tons of information and products for families with food allergies. I picked up peanut-free snack bars, restaurant guides and more. It was quite helpful but also opened my eyes to those with worse food allergies than my daughter. (One mom told me her son is allergic to protein. He can only eat 5 grams of protein a day or his body goes into anaphylactic shock! No way!)
By noon, we were all exhausted. I looked around at these families, who got up early on a dreary Saturday morning, dragging kids into downtown Houston. They got nothing out of this but a bit of exercise that day. I'm wrong. They've won friends for life.
Until the next nap time...
Posted by Kids Activity Queen at 8:45 PM 2 comments:

Labels: 100+ Activities for Houston Kids, fun things to do in houston, peanut allergy 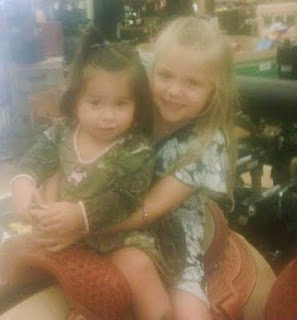 This weekend we stopped by the John Deere store in Navasota since my dad needed something or other there. The girls (Little K and her cousin) decided that they would spend their time sitting on this saddle (see left). Too cute.
Until the next nap time...
Posted by Kids Activity Queen at 10:10 AM No comments:

Labels: fun things to do in houston

As many of you know, my daughter "Little K" has a severe peanut allergy. When it came time for classmates to bring snacks to school for her class, we all learned a whole lot about food allergies. Perhaps one of the most touching experiences was when one mother organized a group at our school to participate in the upcoming Food Allergy Walk... with my daughter in mind. These families willingness to study food labels and walk beside us in this venture has brought tears to my eyes... now three times. I have really been moved by their support and encouragement. So here's what our group is doing and how you can help:

Our Family will be participating in the Food Allergy & Anaphylaxis Network's Walk for Food Allergy: Moving Toward A Cure. The 2.5 mile walk will be held on Saturday, Sept. 12 2009, at Sam Houston Park and is designed to raise funds to find a cure for food allergies. Please support our fundraising efforts with a donation, prayer or good wish.

Tax-deductible donations will make a difference in the lives of many! Any amount, large or small, helps us continue Moving Toward A Cure! We greatly appreciate your support and will keep you posted on my progress.

OR you can join us by Clicking here to view the team page for St. Rose PreK Posse.

Thank you for your support!!! Until the next nap time...
Posted by Kids Activity Queen at 3:32 PM 1 comment:

Labels: 100+ Activities for Houston Kids, fun things to do in houston, peanut allergy 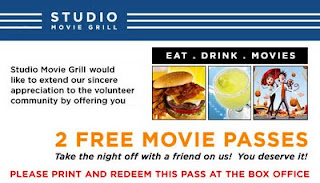 If you haven't yet been to Studio Movie Grill, here's your chance.
No Cash Value. Get your coupon for 2 admissions to the same movie with the same showtime. 3D Service Charge Applies. This coupon (at left) has a unique barcode that can only be used once. Any copies presented after the barcode has been scanned will not be accepted. Secure your coupon by visiting http://www.studiomoviegrill.com/ReferAFriend/referafriend.html.
Studio Restrictions May Apply. One coupon per household.
Valid from Sept. 8th - Sept 30th. Do you have a friend who would also like a Free Movie Pass?Click Here!. For showtimes, please visit http://www.studiomoviegrill.com/
Until the next nap time...
Posted by Kids Activity Queen at 2:56 PM No comments:

Remember the Fall by Doing Something Good on 9/11

I really like this idea from "DoSomething.org" so I thought I'd pass it along.

Take Action on 9/11. September 11th is The National Day of Service and Remembrance. And we want YOU to honor the day by taking action in your communities. Tell us what you'll do on 9/11 by this Friday,9/4 at 5 pm EST, and DoSomething.org will send you a T-shirt!

Check it out at http://www.dosomething.org/user/login?destination=node%2F438161. Or post your ideas to this blog and encourage others to great things on 9/11.

Until the next nap time...
Posted by Kids Activity Queen at 6:08 PM No comments:

Who Knew I'd Learn So Much in Pre-Kindergarten

I just got home from my Board meeting, paid the babysitter and looked in the mirror when I realized my face was adorned with glitter. Nice. I suppose this comes with being the mother of a Pre-K student since not only her artwork but also her dolls, purses and outfits shine with the sticky stuff. How I missed the face of glitter before my Board meeting, I don't know. Is that why our normally 2+ hour meeting lasted just under an hour? Maybe folks couldn't hold in their laughter any more?

Pre-K has brought about several interesting things, including:
- the comment that one boy smells good. When I asked about this, Little K said that the boy puts perfume on the back of his neck. "What are you doing smelling a boy's neck?" I inquired. "No, Mommy. He told me." Okay, I guess.

- When Little K saw a nun this morning with Father Clint, she asked me if the lady was his mother. I quickly realized that my daughter has not ever met a nun. I now have another item on my To Do list.

- My daughter insists that I should NOT put cookies in her lunch. "They're not healthy," she says. I really thought animal crackers/cookies were acceptable but Mommy continues to learn a lot in Pre-K.

- Little K's favorite thing at school? Nap time. "Really, what about art, music, Spanish, religion, reading," I asked, launching the Spanish Inquisition at the Salch household. "Nope, it's nap 'cause it's short," she said simply.

What funny things do your kids say? Or friends' kids say?

Until the next nap time...
Posted by Kids Activity Queen at 8:46 PM 1 comment: