That Pizza Place on Ella

We are now trying "That Pizza Place on Ella", formerly Double Dave's. My salad was fresh & the beer was cold. Trent's Stromboli & my calzone is in the oven. There is a good variety of pizzas, subs & more here.

This is a fun, casual pizza joint for families. They have an air hockey table & a handful of video games. The big screen TV caught my eye, too. My favorite part is the wooden patio in the back, which is great for parties & even a DJ. While they will deliver (713-686-3283), kids will enjoy the joint.

And now for the taste test. Yummy!

Posted by Kids Activity Queen at 3:04 PM No comments:

Have a Splash at Discovery Green 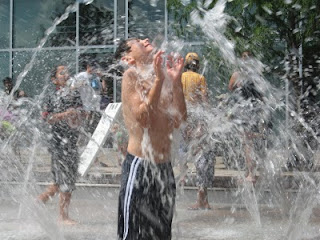 I've been "itching" to take Little K to the fountains at Discovery Green this summer. When I realized last week that summer was almost over and we had not made atleast one visit, I sent a text to my sister Colyn.
Want to go to Discovery Green fountains? Please say "yes".
Luckily, Colyn agreed. Last night, we took the girls just before 5 pm downtown to the fountains. My sister had not yet been there but seemed to really like it. Her daughter Claire (age 2) and my 5-year-old loved every minute of it. I really like that the fountains will slowly increase in height and strength and then stop altogether. 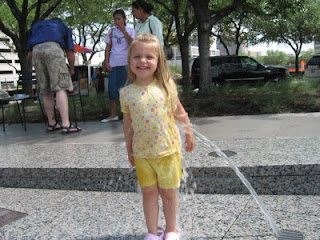 "Where'd the water go, Claire?" I kept asking my niece. My daughter echoed. She'd look around & around  & around until finally, the water started up again. It gives the kids a bit of suspense. I just like to watch.

Looks like we'll make a repeat trip since I deleted ACCIDENTALLY all the great photos that I took of them playing in the water. Oh well. We always need fun things to do. Hope to see you there. I've posted here some of my favorite photos from the fountains at Discovery Green Park. Enjoy!

Until the next nap time...
Posted by Kids Activity Queen at 7:11 PM No comments:

Burn Off Some Energy

Little K was bored to tears (almost). I promised an adventure after I finished my work. She stood close by, watching over my shoulder as I typed. (Clearly, she's never heard the tale about the watched kettle that won't boil!) She didn't have camp that week because we were heading out of town to see my grandparents in Ohio in a few days. Trent & I would take turns entertaining her throughout the week. (That does bring up the point that my mom stayed at home with me when I was little but didn't entertain me every moment of the day. Perhaps I'll save that for another blog post.)

Finally, it was her turn. I had promised that we'd head to the "jumpee thing" at Memorial City Mall before school started. She never seems to forget those promises. So, we drove over, parked and head for adventure. (Enter near Eyemasters and Target.) After a short wait, I paid maybe $10, and the excitement began. The staffer strapped Little K into the harness and she jumped for 5 very long minutes on a contraption that seems like a twist between a trampoline and an bungee cord jump. She loved it and eventually figured out how to flip herself over once she was mid-air. It was cute... and did I mention EASY?

Next, she stepped over to the rock wall, was again strapped in, and then she looked a bit confused. "Get to climbing, girl," I told her.

Honestly, what did she think she was signing up for? I didn't push it.

Little K gave it a good shot and I was surprised when she was so close to the top, she slid down. But there's a bell to ring at the top so everyone knows you accomplished your goal, I thought. Okay, so there are a few differences between my daughter and me but only a few. She gave it another try but gave out a bit sooner. I really think her little legs had just been through enough.

My new secret weapon: the "Jumpee thing" at Memorial City Mall. Little K slept like a baby that night. I smiled in glory! My only regret? I can't find my photos and video on my iPhone. Darn!

Until the next nap time...
Posted by Kids Activity Queen at 6:24 PM No comments:

After a yummy breakfast of homemade biscuits & gravy, we met Aunt Patti & cousin Bentley at the movie theater at The Greene. We watched "Toy Story 3" & really enjoyed it.

Afterward, we walked around the outdoor mall (like Town & Country Villages in Houston). When we returned to the car, a family had run into my PaPa Don's parked car! Luckily, they stayed to talk to a police officer until we showed up. That was our only downer of the trip, except PaPa Don's ear ache. Here's hoping his doctor appointment Tuesday returns good news & the accidental driver pays for the car repairs.

We're waiting for our flight in Dayton & are oddly ready for home. I'm craving our schedule & a bit more play time before Little K heads to kindergarten this Friday. Where did the summer go?

Posted by Kids Activity Queen at 5:08 PM No comments:

During our Ohio trip, we went to Young's Dairy Farm for our first time. It's similar to Dewberry Farm in Houston but has a large dining area that focuses on dairy products (although burgers are available).

A video shows how the staff males the cheese. The ice cream was tasty but too much for us to eat. Little K enjoyed the outdoor activities with our Barrett family. Perhaps we worked off some of our calories.

Many moons ago, my mom, sister & I came to Ohio in August to escape the Houston heat. The other years, we came in early June to celebrate the start of summer. June trips also meant pea picking.

This August, we found the weather in the low 80s. PaPa Don blamed the lack of peas on the rabbits as he had done in years past, although it is really past harvest time. I in turn taught my daughter the potato song:

When Little K found a little potato, she hollered "Souper!" since the little taters go in Grammy's soup. When she found the big potatoes, she threw up her hands & yelled "Mongo!", taking after cousin Lauren when she was a youngster (She turns 24 today).

I took a turn at digging up green onions & garlic, which I taste tested. It had such a strong flavor! I've since been told that I should brush my teeth. Oh well. I've freshened my green thumb & Trent is helping me with our own garden ideas.

Posted by Kids Activity Queen at 11:59 AM No comments:

Put in a cup of Hungry Jack

The mixer seems to really get the pancakes fluffy. However, the true test is in the tasting. Yummy pancakes! Thanks, PaPa Don.

After dinner, there clearly was tickle time between Little K &

Uncle Sean. He was so surprised at the difference between our daughter & his at the same age. (photos tomorrow night will also be telling!) Too bad they both like teasing.

Posted by Kids Activity Queen at 9:36 PM No comments:

Do a Hair Do

As tradition demands, Little K "fixes" PaPa Don's hair. Unlike her mother & her aunt, she doesn't have any temporary hair dye!

Posted by Kids Activity Queen at 7:05 PM No comments:

Little K earned $2 this morning by picking up all the twigs that fell after last night's Ohio t-storm. We then went to a local rummage sale, where she bought coloring pages for 50 cents.

We'd worked up quite the appetite so we drove to the Hamburger Wagon in Miamisburgh, OH.

My PaPa Don says the original owner sold the famous mini burgers for just 10 cents each.

They now go for $1.10 each but are cooked right in front of you & are delicious!

My sorority little sister replied to my FaceBook post about this & says she has fond memories of this "monument", too.

Of course, there is the distinct possibility that we both love this place because our grandfathers have brought us here for years.

What are/were your favorite pitstops with your grandparents?

This morning, we took a peak at

two baby Robbins that were nestled in a nest outside of my grandparents' big window. Little K thought they "were so cute".

Unfortunately, my mug got too close & one of the baby birds lept out of the nest. The mother & father bird quickly flew into action but the baby couldn't fly back into the nest! We obviously backed WAY back but we'll keep a eye on the little feathered friend.

Little K was quite upset with me, claiming I didn't even apologize to the baby bird for scaring it. Ha!

Posted by Kids Activity Queen at 10:53 AM No comments:

Good Start to our Trip to Great-Grandparents

So each summer, we make a trip to visit my maternal grandparents, Little K's great-grandparents, in Dayton, Ohio. We also have aunts, uncles & cousins there. Each year, it proves such a rewarding experience... for me. The opportunity for my daughter to really get to know her great-grandparents is truly priceless.

We landed today to be greeted by PaPa Don & Grammy. An hour or so later, we arrived at their house & Little K promptly headed out to PaPa Don's garden. She picked okra, green

beans, baby pumpkins, cherry tomatoes & even luscious, big, juicy tomatoes! The funniest part is that my mom said they were "her tomatoes" but she didn't fly up here to eat them! Her. Her. Eat your.... Tomato out!

Posted by Kids Activity Queen at 6:10 PM No comments: